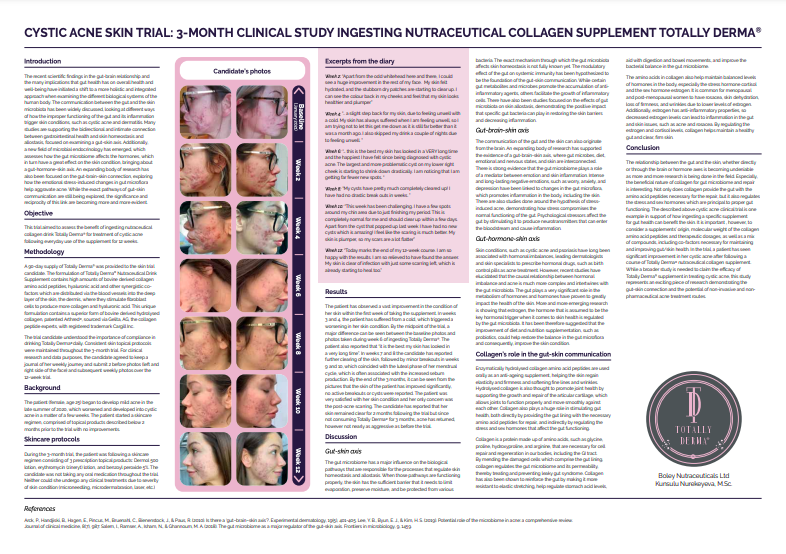 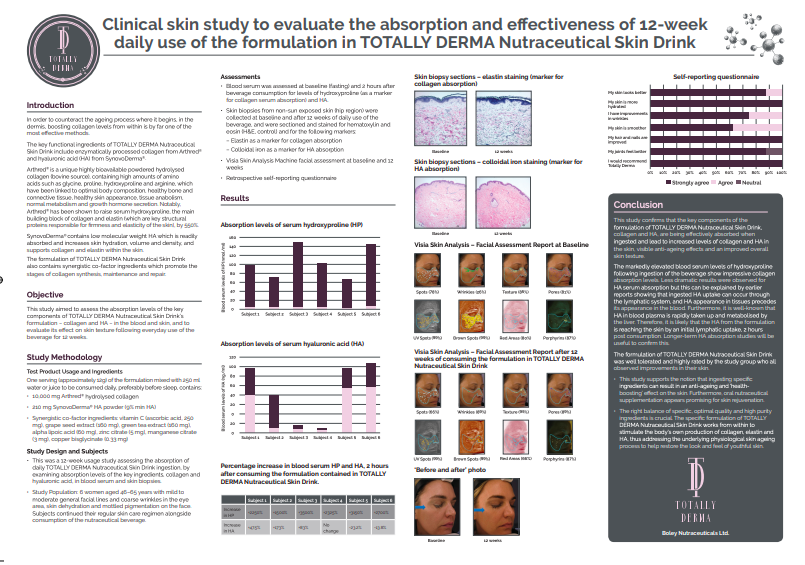 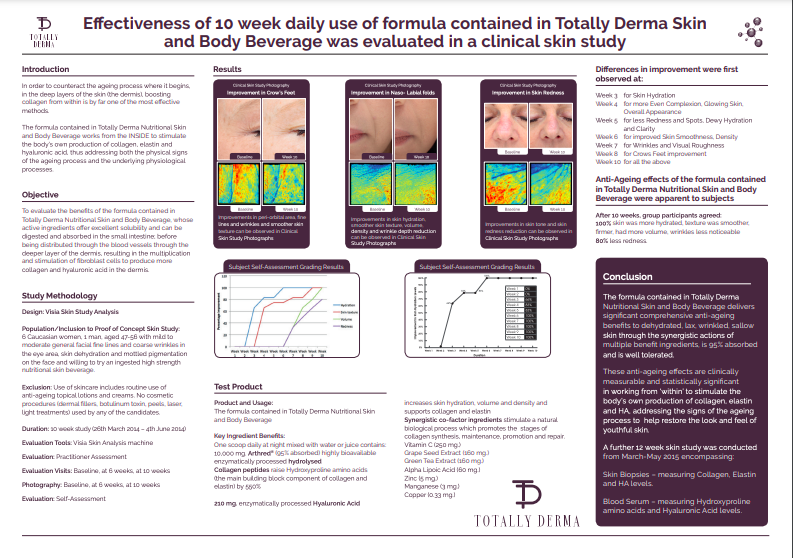 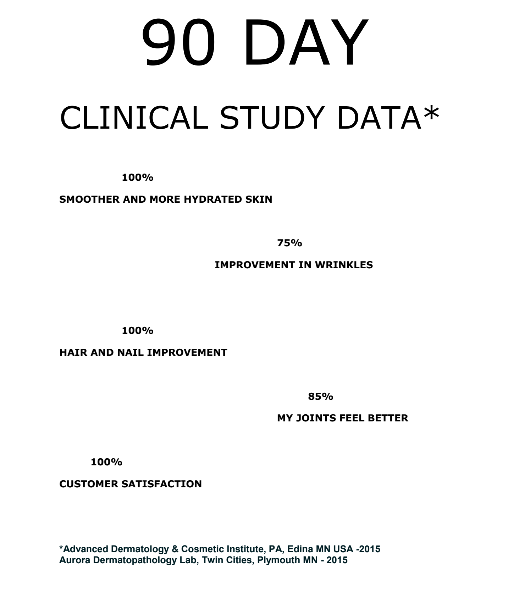 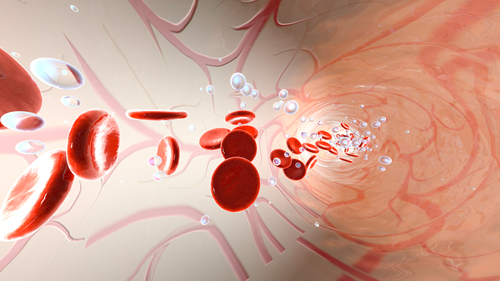 The department of dermatology in the University of Kiel, Germany conducted a double-blind, placebo-controlled trial. 69 women aged 35-55 years were given Hydrolysed Collagen (Bovine sourced) or placebo once daily for 8 weeks. At the end of the study, skin elasticity in the hydrolysed collagen dosage group showed a statistically significant improvement in comparison to the placebo group. With regard to skin moisture and skin evaporation, a positive influence of hydrolysed bovine collagen treatment was also observed. (1)

Bovine sourced Hydrolysed Collagen is also shown to stimulate collagen in the skin and protect skin from the ageing process. Hydrolysed Collagen is shown to have a stimulatory effect on skin tissue, increasing expression levels of the most abundant extracellular matrix protein in skin, Type I collagen. A study conducted in the University of Sao Paulo, Brazil, shows that after 4 weeks of daily ingestion, Bovine Hydrolysed Collagen resulted in a significant increase of collagen synthesis in skin (up to FOURFOLD). Skin fibroblasts (the cells within the dermis layer of skin which produce collagen) were also shown to increase in volume and activity. (2)

Another German University based double-blind, placebo-controlled study, showed oral intake of Bovine sourced Hydrolysed Collagen reduced skin wrinkles and had positive effects on dermal matrix synthesis. 114 woman aged 45-65 years were given Hydrolysed Collagen (Bovine sourced) or placebo once daily for 8 weeks. After 8 weeks the Hydrolysed Collagen group had a significantly reduced eye wrinkle volume varying between 20-49.9%. Pro-collagen type I content was also increased by 65% and elastin by 18% (3) 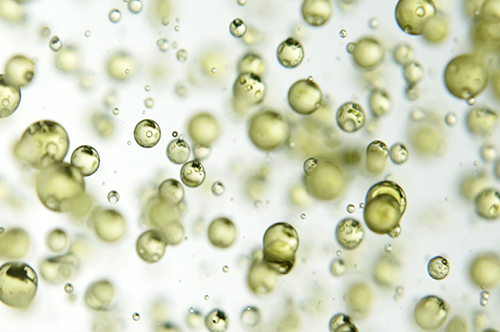 Studies show the best way to maintain moist, beautiful skin is to nourish it from the inside out. As we age, it is important to replenish diminishing stores of Hyaluronic Acid, because Hyaluronic Acid is one of the skin’s most important components for hydration and moisture retention. And without the proper levels of Hyaluronic Acid in the upper layers of the epidermis, your skin appears dull and wrinkled.

Researchers at Toho University have found ingested Hyaluronic Acid supplementation to be directly correlated to measured increases in skin moisture, increased skin smoothness, and amelioration of wrinkles. A double blind study was carried out wherein 35 subjects, who frequently suffer from dry, rough skin were given either a dietary hyaluronic acid supplement or a placebo over a 4-week period. The results showed that the group who had ingested Hyaluronic Acid had a significant increase in skin moisture. Microscopic skin surface analysis also showed an increase in skin smoothness and lessening of wrinkles. (4)

Furthermore, HA dietary supplements are expected to be effective anti-aging supplements because an American ABC News program, which aired in November 2002, investigated the key to longevity in a specific Japanese village was their HA-rich diet (6)

An absorption study by Balogh et al. in 2008 investigated the uptake into bloodstream and tissues in two animal models after oral ingestion of radioactively labeled, high molecular-weight HA, similar to that used in some dietary supplements. *Totally Derma® contains low-molecular weight, (more highly absorbed) therefore this lends to useful discussion points! They found evidence for uptake of radioactively labeled HA into tissues, especially connective tissues, after oral administration to animals. This reviewed HA being potentially absorbed via the lymphatic system. (7)

Another study at Charles University in Prague, Czech Republic, Faculty of Pharmacy, supported that all Molecular Weight HA are absorbed via the lymphatic system. (8), 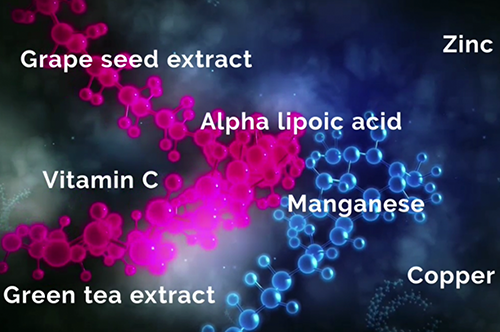 Grape seed extract is known as a powerful antioxidant that protects the body from premature ageing, disease, and decay. Grape seeds contains mainly phenols such as proanthocyanidins. Research suggests that grape seed extract is beneficial in many areas of healthy skin because of its antioxidant effect to bond with collagen, promoting youthful skin, cell health, elasticity, and flexibility. Other studies have also shown that Grape Seed Extract helps to protect the skin from sun damage (9)

A 12-week, double-blind, placebo controlled study of 60 women found that Green Tea Catechins (Catechins are the active polyphenol in green tea) are able to improve skin characteristics, including elasticity, roughness, scaling, density, and water content. Additionally, less UV radiation damage was seen in the group that was supplemented with green tea catechins. The study also showed that after 12 weeks, green tea extract boosted oxygen flow to the skin, which peaked 30 minutes after ingestion. When skin circulation is improved, skin health is also improved, which was shown in this study. In summary, green tea polyphenols delivered in a beverage were shown to protect skin against harmful UV radiation and helped to improve overall skin quality of women. (10)

Alpha Lipoic Acid is a water- and fat-soluble antioxidant that is capable of regenerating other antioxidants, such as vitamins C and E. It therefore exerts numerous anti-inflammatory effects in the body and skin which assists in repair and maintenance. (11 Alpha lipoic acid research was done on human dermal fibroblasts in vitro (test tube) in cell-culture systems. The results showed that, when taken orally, Alpha Lipoic Acid helps to prevent cellular damage via its antioxidant properties. (12) By protecting fibroblasts (the cells which produce collagen in the skin) this helps to slow down the ageing process in the skin and stimulate repair.

Zinc is vital to the functioning of more than 300 hormones and enzymes. (13) One of the most important of these is copper/zinc superoxide dismutase, an antioxidant enzyme associated with longevity and protection against oxidative stress.(14) Skin is a major target of oxidative stress due to various damaging elements in the outer environment (such as UV damage) and various processes within skin itself (such as aging & exercise). The most major contributor to skin ageing and wrinkling is oxidative stress. (15) Therefore zinc is a vital component in skin anti-ageing.

Manganese is required for the activation of prolidase, an enzyme that functions to provide the amino acid, proline, for collagen formation in human skin cells (16) Manganese is therefore essential in the synthesis of skin collagen.

Copper is also essential for healthy collagen and elastin production. Studies clearly show that the synthesis of mature elastin and collagen take place and are controlled by the availability of copper.(17) A lack of copper can induce defective crosslinking of collagen and elastin.(18) This can cause problems such as premature ageing and wrinkling of the skin.